I wish I could draw.  I really, truly do.

And I tried for a decent amount of time.  I bought the how-to books, I studied perspective and I stared at those little blank figure artist models.

I started much like how I started writing fiction as a child- replicating what I knew to be good, even if I didn’t fully understand why it was good yet.  Just as my short stories had an eerie resemblance to my favorite historical fiction novel (and by eerie resemblance, I mean the same exact scenes, just reproduced from memory with different names), I traced Disney princesses out of coloring books, attempted to sketch people from magazine ads and tried to sketch images from book covers.  I eventually moved on to trying to make that blank, wooden artist figure have identifiable traits.

But instead I was like the Frankenstein of the drawing world: trying to breathe life into a mass of fetid corpse parts, then realizing my creation was ugly as sin.  I felt like my drawing abilities, and thus the raw parts I’d use to create life, were also dead and rotting before I even began.

My creations had random body parts that were too big, other body parts were too small, barrel-like torsos would somehow be supported by spindly chicken legs and nothing ever had the character or charm it had in my head when I started.  I ended up with horribly misshapen and misunderstood monsters who were condemned to be banished from sight.

Like Dr. Frankenstein, my own creations made me miserable and I packed it all in.

Luckily around the same time, my writing started to be more original and have more purpose, so my life wasn’t a complete dump of broken creative dreams.  That made me happy, so I threw my life into writing.

But to this day, I wonder what it would be like to have mad drawing skillz.  Who knows, maybe after a few years my drawings of people would start to look like people.  Thanks to the writing, the images in my head are more vivid and wild than ever before.  It’s a pleasant feedback loop.  I have a vague desire for the type of story I’d like to read, can’t find it on the shelves and set to work.  As I write, I discover more about the world and characters, until I’m left with some haunting scenes I’d love to see in an oil painting in an art museum somewhere or a drawing.

While I fantasize about my characters put into a visual art medium, something interesting happens: I learn even more about my characters.  I see their expressions and how those relay just how they feel about a situation (and thus their actions forward), I see what’s on their end table, what they’re wearing and what’s drawn on a to-do list whiteboard in the background.  I see things I wouldn’t have thought about before because I’m stuck in the murky fog of a freshly forming plot, and those additional details become key details.

With that in mind, I propose a writing exercise.  Imagine you’re in an art museum.  This museum is devoted to a story you want to see made, or maybe a story you’re working on now.  You walk in and oil paintings line the walls.  They show characters in their pivotal moments.  Maybe one is pleading something with a lover, maybe another is riding a jet-powered T-Rex in space and shooting lasers at robots or maybe another is just sitting and contemplating a terrible thing they’ve done.

What are the details of that painting?  What are the character expressions and what does that tell you about the range of emotions they’re having?  What are they wearing?  What is on their end table or hanging on the wall behind them if they are at home?  It’s the small details like this that round out your characters and make them human.  It would really drag your story down to describe every single one of these details with excruciating description, but a few of those details may make it into your story.

These small, telling details will then help you to have a range of characters and scenes where readers feel like they’re really there and could really know your characters.  And that’s far more appealing than a bunch of in-artful, two-dimensional monsters. 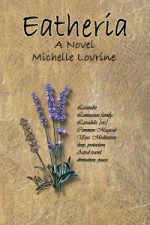 A fantasy novel about spiritual searches, self-identity amid oppression and elemental magic. Get it now!